Click here to check out the Kickstarter (live now through April 13)!

The World Wide Wrestling RPG was originally published in 2015, and it’s been amazing to hear all of the exciting stories from players as they’ve clashed in the ring, played out incredible feuds and explored the reaches of Parts Unknown.

The time has come to put all of these lessons learned to good use! World Wide Wrestling: Second Edition combines all of the material from the original World Wide Wrestling RPG and the International Incident supplement into one streamlined, updated game that supports both quickly getting to the action and long-term dynamic exploration of the promotion around the wrestlers.

The PDFs of World Wide Wrestling and International Incident will remain available at a discounted price until the Second Edition is released (currently estimated to be early 2021). Get into the action while it’s in progress!

This is a supplement for the World Wide Wrestling Roleplaying Game, and requires that game to play. You can check out a free Beta playtest version of International Incident that covers many of the additions to the game (though they have been revised and cleaned up for the full release).

The World Wide Wrestling Roleplaying Game enables you to create your own professional wrestling franchise through play, showcasing satisfying and surprising storylines. It’s about feuds, championships, betrayal, and righteous victory. It’s about the clash of good and evil on the grandest stage. It’s about whether you’ve got what it takes. And, in the end, it’s about what the audience thinks of your efforts.

Getting into World Wide Wrestling for the first time? Check out the WWWRPG+International Incident Bundle, only $8 for both games!

In order to download this tabletop game you must purchase it at or above the minimum price of $3 USD. You will get access to the following files: 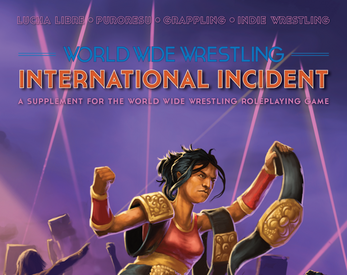