The "list price" for the game is $15, but if you purchased the first edition PDF, or if you are experiencing financial hardship, it is available for $7. So, when you click the purchase button, it'll be prefilled to $15, but you can set it as low as $7.

This is an honor system thing to help out folks who already spent money on the game and/or could use the help. If you can afford the list price, it helps me keep making games like this. Thanks for being cool and only using this if it applies to you!

Welcome to World Wide Wrestling: Second Edition! This award-winning game of professional wrestling action enables you to create your own professional wrestling franchise through play, showcasing satisfying and surprising storylines. It’s about feuds, championships, betrayal, and righteous victory. It’s about the clash of good and evil on the grandest stage. It’s about whether you’ve got what it takes. And, in the end, it’s about what the audience thinks of your efforts.

The World Wide Wrestling RPG was originally published in 2015, and it’s been amazing to hear all of the exciting stories from players as they’ve clashed in the ring, played out incredible feuds and explored the reaches of Parts Unknown.

The Second Edition brings in material from everything released for the original game, refines of the core play experience based on years of play, and includes new rules to support long-term play and going outside the ring, guest essays, guidance for narrating wrestling matches, example Promotions, match stipulations and more!

In World Wide Wrestling, Creative (the GM role) sets up the show, orders the card and books the matches ahead of time. The players choose archtypical pro wrestling Gimmicks, like the Monster, the Veteran, the Luchador, and so on as the base for their character. Wrestlers play through what Creative has planned, but they have the ability and autonomy to pursue their own feuds, set up their own matches and swerve Creative's booking. Creative's job is to make it look like that was the plan all along. Characters are the wrestler as a professional; this means that you play out both their on-screen costumed persona, and their backstage efforts to maintain and progress their careers (and the ways the two effect each other).

Through play focused equally on action in the squared circle and events behind the scenes, you will discover who has what it takes to become a wrestling legend.

World Wide Wrestling is Powered by the Apocalypse. A simple 2d6+stat modifier system resolves the wrestlers iconic actions, like Working the Audience, Cutting a Promo and in-ring Wrestling. Play is mostly conversation, punctuated by occasional rolls and resolutions of the outcomes. The Gimmicks are broad templates customized by the player to suit their wrestling character, and characters advance over time by working matches with their biggest rivals, getting over with the audience and gaining championships. Advancement comes in the form of raising stats, gaining valets or managers, gaining custom Moves and maneuvers, changing Gimmick to evolve the character over time, and more.

In order to download this tabletop game you must purchase it at or above the minimum price of $7 USD. You will get access to the following files: 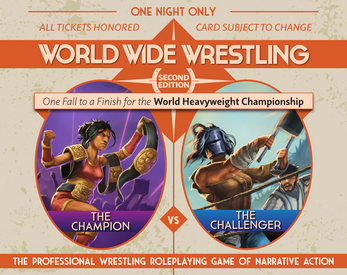